As a homeowner or building owner, it's important to understand mud tubes and what they mean. This article will provide some important facts about mud tubes.

If new mud tubes appear anywhere on your property, this means that termites are actively exploring and searching for food. Take the appearance of mud tubes very seriously because they could indicate an imminent infestation.

Mud dauber wasps also have mud-tube-like nests that people sometimes confuse with termite mud tubes. Mud dauber nests are small and have openings in them via which the wasps enter and exit the nest. Termite mud tubes are long and highway-like, and also much more fragile than mud dauber nests. Don't confuse the two.

3. Empty mud tubes do not mean termites have left the area

Termites often build exploratory mud tubes, which they soon abandon after use. If you break open a termite mud tube and see no termite activity, don't assume that the termites have moved on. You may simply have broken open an exploratory mud tube. Termites mainly use working tubes when going to and from a food source.

Termites often build their mud tubes in discreet locations, such as crawlspaces, cellars, and in wall cavities. If you think you might have a termite problem but you see no presence of mud tubes, the mud tubes could simply be behind the walls or under your feet.

6. Etching suggests that a building had mud tubes in the past

If you have recently bought a building and see the presence of old mud tubes, which may be in the form of etching, your building may have been infested with termites in the past. Consider hiring a termite inspector to ensure that the building is now free of termites.

For more information on termites, contact a professional near you. 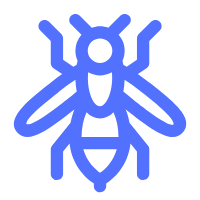 Termites, ants, and roaches have to be some of the most common and most annoying household pests. Roaches make your home smell, and they also spread disease. Termites can chew anything made from wood to bits, and ants are just creepy with their tiny legs and nest-building capabilities. Pest control companies can keep all these nasty insects away, and they can also help manage less-common pests like earwigs and house centipedes. As annoying as pests are, pest control is a pretty interesting topic, and it's one we explore in more depth on this website. Start reading, and say goodbye to ants, roaches, and termites for good.

If you want to treat your home or property for ter …

Of all the many termite species, the most destruct …

Tips to Keep Skunks Away from Your Residence
25 August 2022

Skunks in your yard can be a real pain. Unfortunat …

While having your home professionally inspected an …

Depending on where your home is located, mosquitoe …